Back in the 90s, I spent a little over a year in the Kalahari in Southern Africa. I met many wonderful people and was able to camp in a number of parks in Botswana and Zimbabwe when I had time to wander. While teaching English in a small school in the village of Kang, I started an art club with my students. I also adopted a Rhodesian Ridgeback puppy–the runt of a litter of dogs born in Kanye–and spent many days walking around the village with him on my heels.

When it was time to head back to the States, I was fully prepared to bring my little dog with me. His crate was ready and I had all the necessary fees paid and paperwork filled out and that included a period of quarantine in England. Days before our flight, a veterinarian in Gaborone informed me that Baka had cancer in his hip and would not live very long at all. His hip was quickly and painfully deteriorating. Because he was accustomed to a life that most dogs in Botswana were not–he lived in my house and slept on my couch–and because I had no one who could guarantee his care once I was gone, I made the gut-wrenching decision to have him euthanized. It still bothers me to this day.

I did manage to bring home a few treasures, though–reminders of my time in Africa: a set of gazelle horns found in the sand a mile or so from Kang; an empty ostrich egg and turtle shell amulet given to me by Setsane, an old Bushman, and his tiny grandson who used to come by for tea and fatcakes now and then; a handful of Devil’s Claws; several journals detailing my experiences; photos; a well-used tin of Staedtler Aquarell watercolor pencils; and a folder of illustrations.

The bigger illustrations, done on 12 x 17 inch sheets of paper, were inspired by the wildlife I saw, but also by the bizarre dreams I had as a result of taking Mefloquine which is a drug used to prevent malaria. Over the years, even though the illustrations have been stored in a large ITOYA portfolio for much of the time, the colors have faded. The pencils were purchased from a small art store in the central mall of Gaborone, but I can’t recall where I found the paper. It wasn’t the best quality and has yellowed significantly over the past 20 or so years. A good reminder that if you want your art to last, use the best acid-free paper you can find. 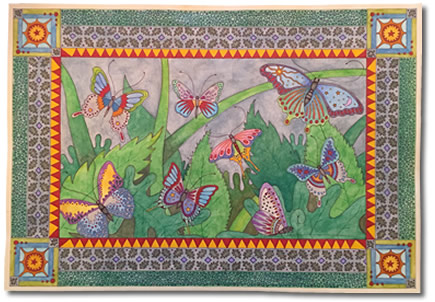 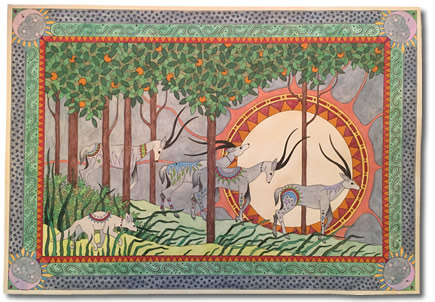 I have only 8 of those Staedtler watercolor pencils left, but it feels good seeing them nestled in with my newer art supplies. Comforting, somehow, that they made it far and long enough to see me get back to my arty roots and finally launch this new project.